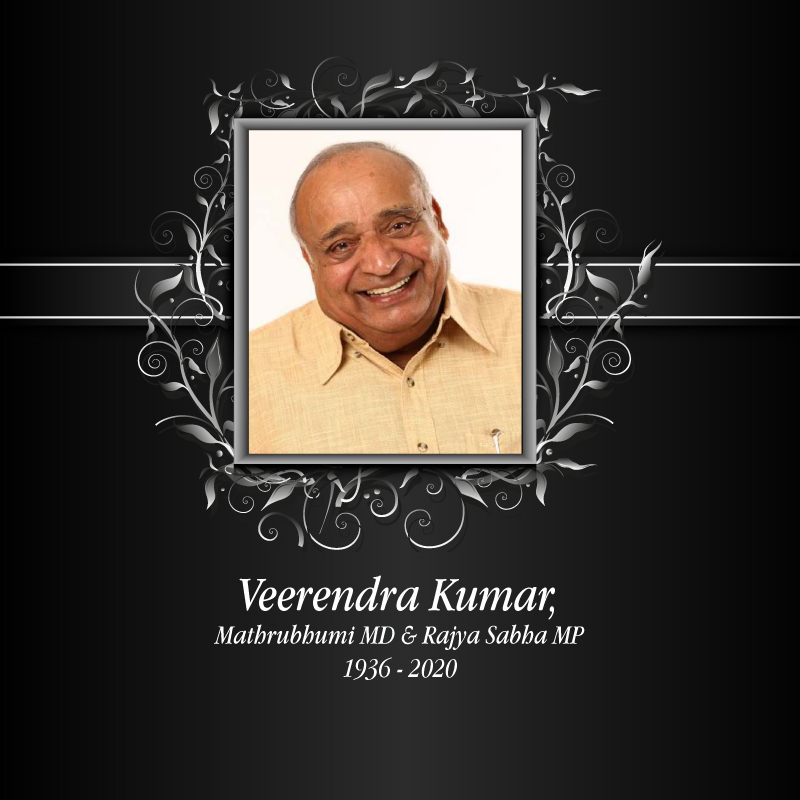 Love him or loathe him, it was impossible for anyone to ignore.
Veerendra Kumar ( Veeran from now onwards). He was brilliant, he was boisterous. From the time he joined the Board of Directors of Mathrubhumi in 1978, he spent hours with me, not to discuss the newspaper as much as to talk about life, about literature. In 1984 he replaced the Editor of the Mathrubhumi newspaper and Weekly, a veteran of the newspaper world (V P Ramachandran) then in his 60s with a 34-year old who had spent very little time in Kerala. A 34-year old who did not conceal his lack of fluency familiarity in that exquisite language, Malayalam. His choice as the new Editor of the Mathrubhumi was me.
Veeran’s choice surprised the Board as well as the traditionalists within the Mathrubhumi. They waited for me to fail and were surprised when the journalists in the newspaper and magazine took to their new boss in a newspaper launched in 1921 as the clarion cry of the freedom movement.

The Watergate exposes and the Pentagon Papers still fresh in my mind, journalists were asked to dig up the rocks on which VVIPs had perched for so long without getting troubled by the genteel Malayalam media. Scam after scam, dodgy decision after dodgy decision, was brought from the darkness of opacity to the bright light of the front page. Younger journalists saw for the first time their bylines appear, and often on the front page. Abolition of caste privileges at Guruvayur, opposition to patriarchy in a section of the Muslim community, the pro-Pakistan mutterings of some Muslim League leaders, support for Mary Roy’s crusade against inheritance in Christian families only for men. The newspaper succeeded in annoying the elite in all three of the state’s major faiths while the Weekly began to carry the stories of writers who till that time had been unable to get their work published even in much smaller newspapers. The state was ruled by the Congress Party, and Chief Minister K Karunakaran was not amused. It must be said to the patriarch’s credit that never once did he seek to cashier a journalist for a report, even those who built their names on finding out less than complimentary facts about his team. Veeran was a backer of the opposition, and loved the combative stance the paper was adopting. The other large shareholder, the KTC family, supported Karunakaran and was unhappy at the tone of several reports. But P V Chandran was a gentleman, and never carried any protest beyond an irritated frown.

Times changed when the CPM won the assembly polls in March 1987. The new Chief Minister, E K Nayanar, had been an admirer of the newspaper while in opposition but changed his views on press freedom once he took over the government. The KTC family soon decided that the CPM was at least in Kerala preferable to the Congress Party, and joined hands with Veeran in asking for the newspaper to abandon the path of what both termed “aggressive journalism”. Others were brought into the fray. The Muthoot Group was the subject of a series on companies who gave loans and grew rich on the properties of those who could not regularly meet interest payments. Unhappy at such coverage, the head of the company visited the present writer in his cabin in the Trivandrum office of the Mathrubhumi. He was accompanied by his young son and by the Mathrubhumi MD. The young lad was an intelligent lad who had travelled with the writer from Ernakulam to Trivandrum some months before. The journey was long because of problems with the track, and the young Muthoot spoke with a maturity that impressed me.

But his father bringing his young son to such a meeting felt like pressure, as did the formidable presence of Veeran. If Mr Muthoot had come on his own, perhaps the behaviour of the Editor would have been polite rather than peremptory, a mood that only increased when a suicide note was written and presented by Muthoot Senior during the meeting. While what seemed like unusual pressure tactics was annoying,
some of the arguments made by him were not. The newspaper certainly did not intend to carry out a campaign against anyone, and so afterwards my decision was to carry the next day a report that had already been written but stop the Muthoot series after that. This was not communicated to Mr Muthoot, as it was hardly his business to concern himself with editorial decisions when he was not a Director of the company. Board members represented the 5% exemption to the 95% freedom given to the Mathrubhumi journalists by the Editor, who persisted in not changing the investigative (or “aggressive”) slant of the newspaper, only to finally have the patience of Veeran snap by the second half of 1987.

It was in 1987 things began to rapidly sour in the relationship between the Editor and the Managing Director. Veeran began to believe the false stories that folks in India routinely spread about those they regard as too brash or too successful at their job. On my part, I trusted Veeran, even to the extent of immediately handing him the “suicide note” of Muthoot Senior and in the same way a handwritten letter by his sister that referred to issues she had with him. Both were subsequently used against me. By the end of that year, he had succeeded in removing me from first the Editorship and later the Board. We met a few times after that, but these meetings were always cordial. The years 1978-86 outweighed that single year (1987) when his attitude changed, and he seemed to return to the earlier Veeran. The last time we met was in an aircraft going from Trvandrum to Delhi, and his charm, wit and brilliance were on full display during our conversation. He made the Mathrubhumi (which had been shaky when he took charge) into a corporate giant, much to the benefit of both shareholders as well as employees. Had he given more attention to politics, Veeran would have been an outstanding Defense or Home Minister rather than just a Minister of State during the short periods when he stepped away from running Mathrubhumi to take up ministerial office. Veeran’s passing leaves a void that is impossible to fill.

M D Nalapat is a former Editor of Mathrubhumi and The Times of India and one of the most well known Editors of our time.